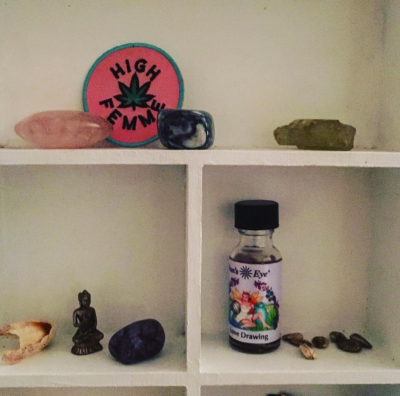 “Caring for myself is not self-indulgence, it is self-preservation, and that is an act of political warfare.” -Audre Lorde

In a 2014 installment of her “Breathless” column for Vogue.com, blogger Karley Sciortino wrote “Setting Your Boundaries When Dating a New Ager.” The piece is a comedic and biting—but oh so true—examination of the contemporary iteration of “New Age” culture. Sciortino addresses the people who swear by cleanses, those who can’t get enough of ayahuasca ceremonies, then the others who love their shamans, moon worshipping rituals, gratitude practices, the whole lot. It’s fucking hilarious, but also a little #tooreal. For me, at least. “Everyone should be aware,” Sciortino warns, “that the cute lawyer you met on Tinder might have crystals on his bedside table.” I am not a lawyer, but I often wonder how many people I encounter to whom I successfully “pass” as rational, cynical, post-spiritual.

I am Jewish—and couldn’t conceive of my identity without Judaism—but I don’t regularly celebrate Jewish holidays nor do I practice Jewish rituals. I also do not believe in God. While I meditate daily, and am a student of Buddhist texts, I can’t say I fully identify as Buddhist (or JuBu). Maybe I am, ambivalently, a New Ager myself.

I know that when I used to be on Tinder (for two years, before meeting my current BF on it), I often felt the need to “come out” as New Age (not in those words at the time) to my Tinder dates.  In fact, it usually didn’t require deliberate work: as soon as I would roll up to the bar in my Namaste beanie and tell my dates to “honor their truth” as they debated which cocktail to order, the cat was out of the bag: I was a crystal-bathing yoga biddie with a 19 dollar vial of rose-quartz- and rose-petal- infused vodka on my window sill. Today, however, I still don’t fully understand how to characterize my relationship to the various signifiers of pseudo-Paganism infiltrating the capitalist machine these days. Yoga, crystals, sage, “energy,” tarot.

Frankly, it makes me uncomfortable to position myself, like Sciortino, as fully dismissive and ironic of these things. Probably because I am not.

At the same time, I also feel uncomfortable admitting that I “believe in” the power of crystals or that I genuinely feel vibes of renewal on new moons. Partially, I think that my spiritual life is littered with paradoxes and that it would be too easy for me to “believe in” anything. I also think I worry about the class implications of wholly subscribing to a set of things that are expensive and elitist and, quite frankly, unnecessary. I allow all of these attitudes to exist together, and it’s uncomfortable, but such is spiritual life I guess.

In 2014, after a year had passed and my heart had broken, I started realizing just how much spiritual rituals were being commodified in my immediate surroundings. (Read: it felt like all of the privileged, over-educated and urban-dwelling (neurotic) people I knew in NYC became witches. Or something like that.) And admittedly, I quickly joined them for the ride.

Friends and acquaintances of mine regularly flocked to new moon circles featuring vaginal iconography; I regularly hosted vision board making parties, and led female-only workshops on self-love, manifesting and the meaning of sexual truth at a yoga studio and healing center in Brooklyn. On the night of the spring equinox in 2015, my friend and coworker (at a digital wellness publication) invited me to a “Vernal Equinox Ritual Celebration,” led by a woman who self-identifies as “a ritual expert.” I agreed to go to the event in part because it was free, in part because it sounded entertaining, and in part because I was earnestly intrigued by what strikes me as a Paganism Revival among, as I said, everyone I know in New York who is over-educated, neurotic, and, for lack of a better word, “privileged.” Repetitive, I know, but it feels necessary to qualify again and again.

When my friend and I arrived at the ritual ceremony, we met the other participants, all of whom appeared to be friends, and were wearing patterned Lululemon leggings and loose fitting sweaters. There was only one man present, who was a skinny 20-something guy with sculpted Yoga-arms and a man bun. He wore a tank top and man-leggings, and was there with his waif-ish blonde friend who, I overheard, was celebrating some important anniversary of being vegan. There were others—probably 15 of us total, me and my friend among them, a little tipsy from our pre-ritual beers around the corner.

When the ritual ceremony started, our leader instructed us to go around the room, say our names, our mother’s name, our grandmother’s name, our great-grandmother’s name (and so on). Spring, I learned from our event leader’s prelude, is a great time to celebrate the Divine Feminine—the literal and metaphorical “mothers” in our lives, the embodiment of beauty, grace and fertility in us and around us. “You can be your own mother,” I remember the leader telling us. Cheesiness aside, her advice resonated with me, as I’ve always struggled with self-judgment. The idea of being my own mother, especially during tough times, made sense to me—as it helped me compartmentalize my caring self as someone external, someone immune to my self-sabotaging bullshit.  It gave me a vocabulary for self-care that felt decidedly not self-indulgent.

During the event itself, we went through various rituals to connect more to ourselves, to each other, to our mothers. One of them was called “an egg divination,” and involved rolling a hard-boiled egg with several of our intentions written on them across the room to see which intention we should focus on. I will note that the vegan of our group had to leave the room because she was so distraught about the presence of animal-derived activity materials.

You may be confused about what my attitude toward all this stuff was at the time, or what it is today. Well, I am still a unclear. But one thing is clear to me, and to others: New Age-y-ness has made a comeback in the 20-teens, and that there must be some sort of sociocultural slash historical explanation as to why. Last year, the editors of n+1 published a piece entitled “Stars—They’re Just Like Us” for Issue 24 of the magazine (the theme of which was “New Age”). In the piece, the editors ask the rhetorical question, “When had astrology become our irrationality of choice?” and quickly provide an answer: “Probably sometime around 2012, when things were not so good for us.”

Indeed, there’s something to this argument, and it’s not unique to the topic of astrology, nor to the editors of n+1. Any ritual can be individually comforting during times of collective discomfort because, in large part, they ask us to be passive, to put our intellects on hold, to “hold space” (love that expression) for that which we cannot control. Many, if not most, popular spiritual rituals have long, long histories, and yet in today’s world they still strike many as silly, most as self-indulgent. We are living in the so-called “Information Age,” so is it that we feel dumb running away from information and toward irrationality? Maybe so, but I say, “fuck it!”—at least in part.

The n+1 eds quote an article critic Christopher Lasch wrote in a 1976 issue of The New York Review of Books in which he argues that Americans sacrificed interest in politics in the 1970s for the sake of “purely personal satisfactions” like Buddhist philosophy and therapy, running and aerobics classes. Lasch saw all of these things as a retreat from political turmoil—helping the self came to replace helping the civic body.

I don’t know if I genuinely believe crystals bring me good energy, or if the tarot deck has all the answers. I recognize these are distinctly #firstworld concerns, and also that there doesn’t really need to be a think piece about commodified spirituality now that we live in Trump’s America. But actually in the wake of recent political turmoil, I have been looking for something comforting to mollify my anxiety as I read the news and try and stay engaged and active in all the bull shit. I don’t know why I feel that I am a spiritual person, but I do feel that I am. I understand that such an attitude is a byproduct of my matrix of privileges, and also recognize the limitations of relinquishing my control in life, especially when it comes to our current political climate.

But I still think it’s worth asking ourselves why we gain comfort from the things that comfort us, and what we can do to be more in touch with them, without self-criticism. For me, the bottom line is that self-care—genuine self-care, not just doing spin class to burn calories and drinking water because it’s good for you—is related to one’s politics. It’s a tool for resilience and no one—not even you—should give a fuck if it seems silly. So long as you’re checking your privilege and not being a dick to other people,  I don’t care how many crystals you charged on February 10th’s full moon, and I celebrate all of the wisdom it brought you, or didn’t.

One thought on “What Does It Mean To Be Spiritual?”

My name is Charlotte. I am a freelance writer and editor. I try to find humor and poignance every day, and I also try not to hate myself too much.
%d bloggers like this: